Kat Cole: “There’s a leader in everyone.” 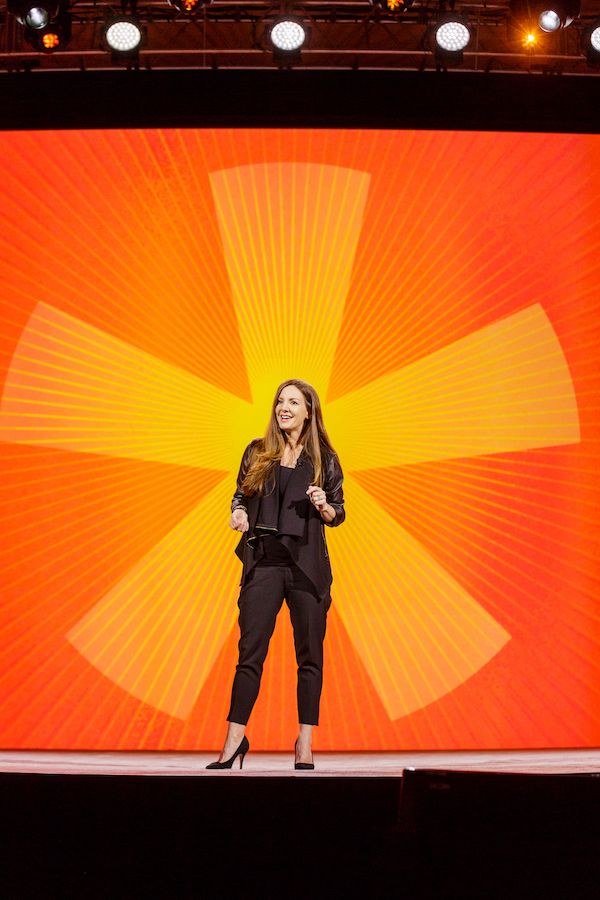 Today she’s the president and COO of global franchise company Focus Brands. But at age nineteen, Kat Cole was an hourly employee at Hooters Restaurants, working her way through college, when her career trajectory took a dramatic turn.

In an exclusive interview with Workhuman®, she shared how, when the company needed someone to travel to Australia to open a new franchise, they asked her to go. Of course she said “yes.” “I really didn’t think it was a career move,” she reflects. “I thought it was a once-in-a-lifetime opportunity.”

And while she already had experience as a trainer in restaurants, it was quite a leap for someone that young to travel that far. She didn’t have a passport, so she traveled to Miami on her own dime, stood in line, and “expedited” the process. “I flexed my hustle muscle. I said ‘yes’ before I was ready, but then did the hard work to fill the gaps.”

A one-time trip becomes a “thing”

But a funny thing happened once she returned to her “regular” job. Her “one-time” trip to Australia morphed into additional trips to countries in Central and South America. She soon realized that launching restaurants was a “thing.” “And I also realized I was better at it – with less effort – than some people. I had the tolerance for the chaos, and I had the curiosity to understand the local culture. And I had the humility to be wrong and ask for help.”

With her travels taking a toll on her studies, Kat decided to drop out of college – with no guarantees from Hooters of continued employment. Not surprisingly, the company soon offered her a salaried corporate position, and at age 20, she moved to Atlanta.

So what was it that made her say “yes” to that first trip to Australia, when many would have shied away from the challenge?

“I have come to believe that the reasons people say ‘no’ to something are because of their beliefs around what preparation is needed. I would just encourage everyone to remember that we all have our ‘firsts.’ I had my first [restaurant] opening. I had my first shift as a cook. I had my first shift as a bartender.” In her view, learning is the essence of a career journey, requiring only “the humility and curiosity to ask questions, and the courage and confidence to make some decisions and bold moves.”

In other words, if you wait until you feel you’re ready for your big opportunity, then you’ll be late to the party. Those who are the true pioneers are those who say “yes” before they’re 100% prepared – before they’re comfortable.

Bringing out the leader in every person

Kat discussed how the Hooters brand – and the challenges it presented in recruitment – created an environment that fostered opportunity for those on the inside. “This was Hooters Restaurants, so it’s not as if there were Wharton MBAs beating on the door. The nature of the brand was very polarizing. The people inside of it loved it. The people outside of it judged it.” This dynamic taught her an important lesson that would serve her well in later years – the power of developing people from within.

So how does this highly successful executive define great leaders? According to Kat, “it’s not just about leaders as a level or leaders as a title, but bringing out the leader in every person. Bringing out the courage, the ability to question things that should be questioned. There is a leader inside of everyone.”

As the head of a global franchise company, Kat is keenly aware that great ideas are much more likely to come from those on the front lines than from executives in the C-suite. As she put it, “there aren’t cash registers in our corporate office.” The introduction of a smaller version of their classic cinnamon roll is a prime example. A franchisee realized that – surprise! – not everyone wanted the large, oversized rolls for which Cinnabon is famous, and began introducing a smaller version. According to Kat, they now account for between 30% and 40% of sales.

In her view, the role of the leader is to “make the most of the team – to drive toward common goals and results.” As she noted in her Workhuman® Live keynote address, it is up to a leader to have the courage to say, “I would be failing you if …” With those words, leaders move beyond the fear of how a person will react to coaching, to focus on what will happen if they fail to give needed direction.

She cites her own failings in this regard: “I learned by mistakes. There were times I didn’t speak up … And little by little, I was failing the organization by not calling out behavior.”

“’I would be failing you if …’ is about reframing the expectation of what my job is – that my job is to not fail you, to not allow behavior to go unaddressed, or not allow an opportunity to be missed … not just leaving you alone and making you happy.”

In closing, Kat talked about her willingness to be an open, authentic, and transparent COO in a time when many leaders are afraid to acknowledge their mistakes. In her view, it comes down to having a comfort level with being vulnerable – a critical element to building trust.

What Is Training and Development in HRM? 2022 Complete Guide

What is Strategic Human Resource Management (SHRM) in 2022?