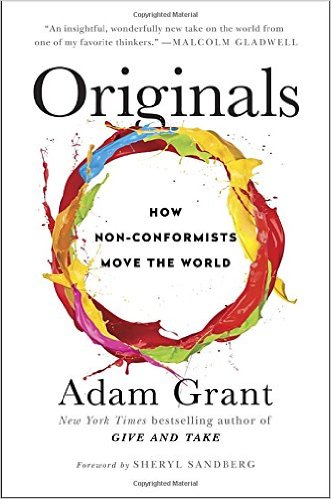 Lots of companies say they want to be innovative and push beyond commonly accepted boundaries in their industry. But is your HR strategy truly supporting this endeavor? Are original thinkers flourishing – or being stifled – in your organization? Are you taking the right steps in hiring, developing, and recognizing the next generation of original thinkers?

WorkHuman 2017 speaker and best-selling author Adam Grant has some ideas that might surprise you. We recently talked with Grant about his new book, Originals: How Non-Conformists Move the World. In the first part of our conversation below, we discuss procrastination, combatting groupthink, and why you should start hiring for cultural contribution as opposed to cultural fit. If you’d prefer to listen to the interview, click the episode of WorkHuman Radio embedded at the top of this post.

How do you define an original? Do you think people are born originals, or can you become one?

An original is somebody who not only has creative ideas for improving the world around them, but also takes the initiative to make them a reality. This would have been a really sad book to write if people were born originals – that would be the end of the story. The evidence is overwhelming that we all have different starting points for how creative our thinking tends to be, but we can all increase our originality.

You write that great originals are great procrastinators. Do you think there’s a stigma against procrastination in the corporate world? And how can we combat that?

I think there is. Especially in a world that’s become increasingly dynamic, it’s a huge liability if you have anybody who’s putting off work – when speed is the imperative, when there are competitors waiting to put you out of business, when work runs 24/7. The side effect is that people are operating under constant urgency and time pressure. It’s a great way to get people to rush ahead with their first ideas, but it’s not an effective strategy at all for getting them to think through their best ideas.

I don’t want to suggest that everyone should be a procrastinator all the time. But I did find in some research with a former student, Jihae Shin, that when people procrastinate, they give themselves time to incubate. They consider lots of different ideas instead of that first one that that was easy to think of or easiest to implement. I think we need to give people the time and space to have those kinds of ideas.

So what do we do about that? There are several Fortune 500 companies that have started instituting quiet time policies. For example, at one Fortune 500 software company, they instituted no interruptions between 9 a.m. and noon on Tuesday, Thursday, and Friday to do creative thinking. It’s time for you to work on problems that haven’t been solved yet. And then you can start interacting and sharing your insights after lunch.

Another example I really like is at Warby Parker, where every week they have all their employees write up 5-15s. It’s supposed to be an idea that takes you no more than 15 minutes to write and no more than 5 minutes for anybody else to read. That way you don’t spend your entire job just delivering and focusing on results. You actually have time to step back and think about what kinds of problems need solving and how you might approach them in an innovative way.

What role do you see social recognition playing in developing and encouraging originals?

I think it’s huge, and it’s something we don’t talk about enough. One of my favorite studies – and I say favorite because it’s one of the most disturbing – shows that across industries, when you ask people about their biggest suggestion or boldest idea, 85% of them stayed silent, instead of speaking up. Imagine you have an insight or direction that you think is really promising – it could be a new product or service or just a better process or a more efficient way to do your job. The vast majority of people say, “I’m not going tell anyone, ever.” Then the question is why? Most people think it’s fear, and fear is a factor. But much more important than fear is futility. People think, “I’m not necessarily going to get punished if I bring this idea to the table, but I don’t think anyone’s going to listen to me. It’ll fall on deaf ears, and it’s not going to go anywhere. So what’s the point?”

I think recognition is one of the best antidotes to that. We have lots of studies showing that if you recognize the kind of behavior you’re looking for and highlight that to other people, they start to see that the behavior is valued, encouraged, and appreciated. When you recognize people who have contributed great ideas, it sends a clear message to a whole workforce that says, “This kind of behavior is not only safe, but it actually does move the needle around here. It’s worth spending your time developing and generating ideas. But it’s also worthwhile to voice them because other people will take notice.”

Something else you talk about in your new book is groupthink and how it can kill originality. Can you explain groupthink?

Groupthink is when everybody is looking at a problem in the same way. Convergent thought is valued as opposed to divergent thought, which is obviously dangerous because you start to stamp out creativity and innovation. You end up getting trapped in your own beliefs. It’s pretty easy, then, to become a prisoner of your own preconceptions. And if everybody sees the world the same way and shares the same beliefs and assumptions, you’re just waiting to get disrupted.

What is the best way to foster a strong culture with similar values, but also value in dissent?

One of the mistakes that I see a lot of leaders make is they say, “We don’t want to just hire stars, because we know that values are important. So when we hire, we’re going to prioritize culture fit. We’re going to bring in the people who live and breathe our core principles and identify with our mission.” If you’re a small startup, that is really effective. Startups that prioritize culture fit – instead of just hiring stars or people with the skills they need – are less likely to fail and more likely to go public, which is great. Except afterward, the ones that placed a premium on culture fit have the slowest growth in annual market capitalization.

Early on culture fit is useful because you end up with a uniquely motivated group of people who are marching in the same direction. There’s total clarity and passion around what matters. But as you grow, culture fit becomes a proxy for groupthink, and you end up bringing in a bunch of people who see the world in exactly the same way, and you weed out diversity of thought.

The best solution I’ve seen is an idea from the design firm that made the mouse for Apple. They have design thinkers who are excellent at solving problems, but they realized there are different ways to approach issues their clients bring to them. So they started to look at hiring for cultural contribution rather than culture fit. Instead of trying to figure out what’s present in their culture and cloning it, they ask, “what’s absent from our culture?”

They’re constantly going into new worlds that they don’t understand yet. For example, they were asked to redesign a shopping cart. They said, “We push shopping carts, but we’ve never built them before. Let’s figure out who’s good at that.” Well, that’s what anthropologists do for a living. They go and understand unfamiliar environments and try to make sense of them for the rest of us. So they started hiring more anthropologists. And, suddenly, they’re like, “These people are amazing. We should only hire anthropologists,” which, of course, misses the point. And then they said, “All right, the moment we feel like we should be bringing more and more of one background is the moment we need to diversify again.”

They wondered who could help translate what the anthropologists were learning for different audiences and stakeholders, and realized that’s a storytelling skill. So they started hiring more journalists and screenwriters. I think that’s a great example of how you continually look for enriching cultural contributions as opposed to just cultural fit.