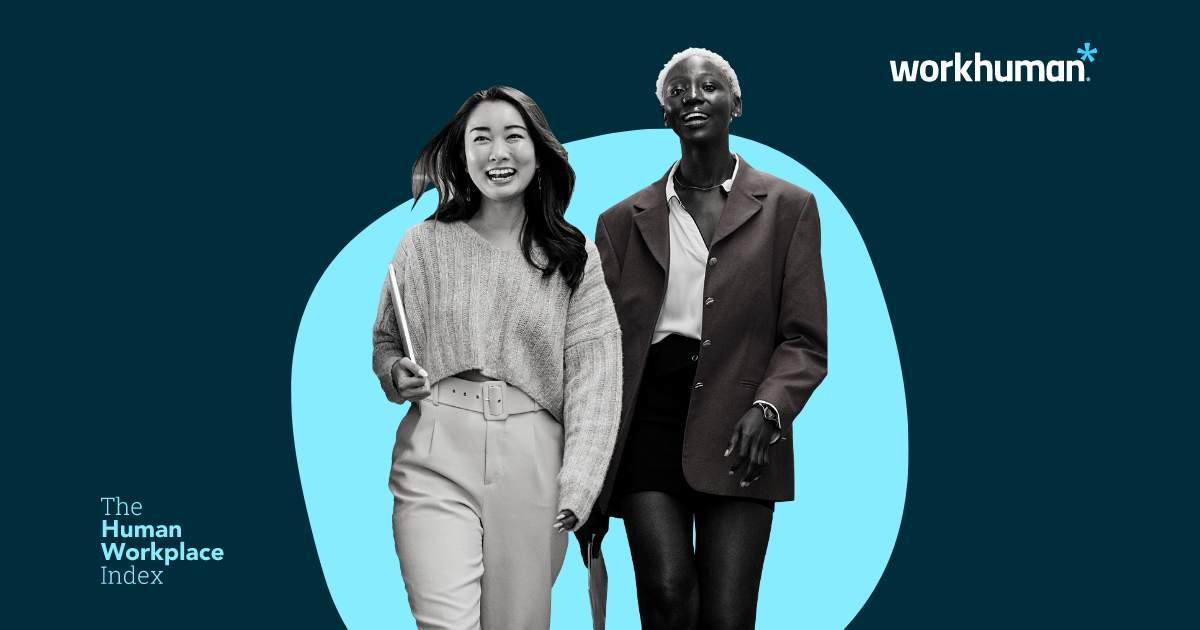 For many, a new year means new resolutions. Or in some cases, carrying on resolutions from years prior.

In the workplace, diversity, equity, and inclusion goals are ones that continue rolling over to the new year. Is that because organizations are constantly working to further their DE&I initiatives, or perhaps because employers are not prepared for the work that goes into building a sustainable strategy that lasts year in and year out?

This month’s Human Workplace Index (HWI) is looking at just that: what is the current state of diversity and inclusion in the workplace? How do employees feel about it? And what should organizations prioritize in their 2023 action plans?

1. Catching up with employees

We all want to start the new year off right, and part of that is returning to work refreshed and ready to go. To do that, employees need to feel supported and valued, and, right now that doesn’t look to be the case.

This month more than one-half of employees reported feeling only somewhat valued (46.4%) or not valued at all (10.7%) by their organization. Employees of color were more likely to report feeling somewhat valued than the average (49.3%), as were women (48.8%).

A place where employees don’t feel valued likely isn’t a place they want to return to. Employers can change that by prioritizing an authentic culture of diversity, equity, inclusion, and belonging.

And as economic uncertainty continues into the new year, these DEI initiatives are often some of the first to go, making this an invaluable opportunity for forward-thinking organizations to stand out amongst their competitors.

In 2023, perfunctory initiatives to boost or promote DEI will no longer cut it. And while employees themselves may be aware of this, there is a clear disconnect between them and their managers.

This month’s survey found there is a vast discrepancy between how managers and employees feel about their organization’s DEI efforts. 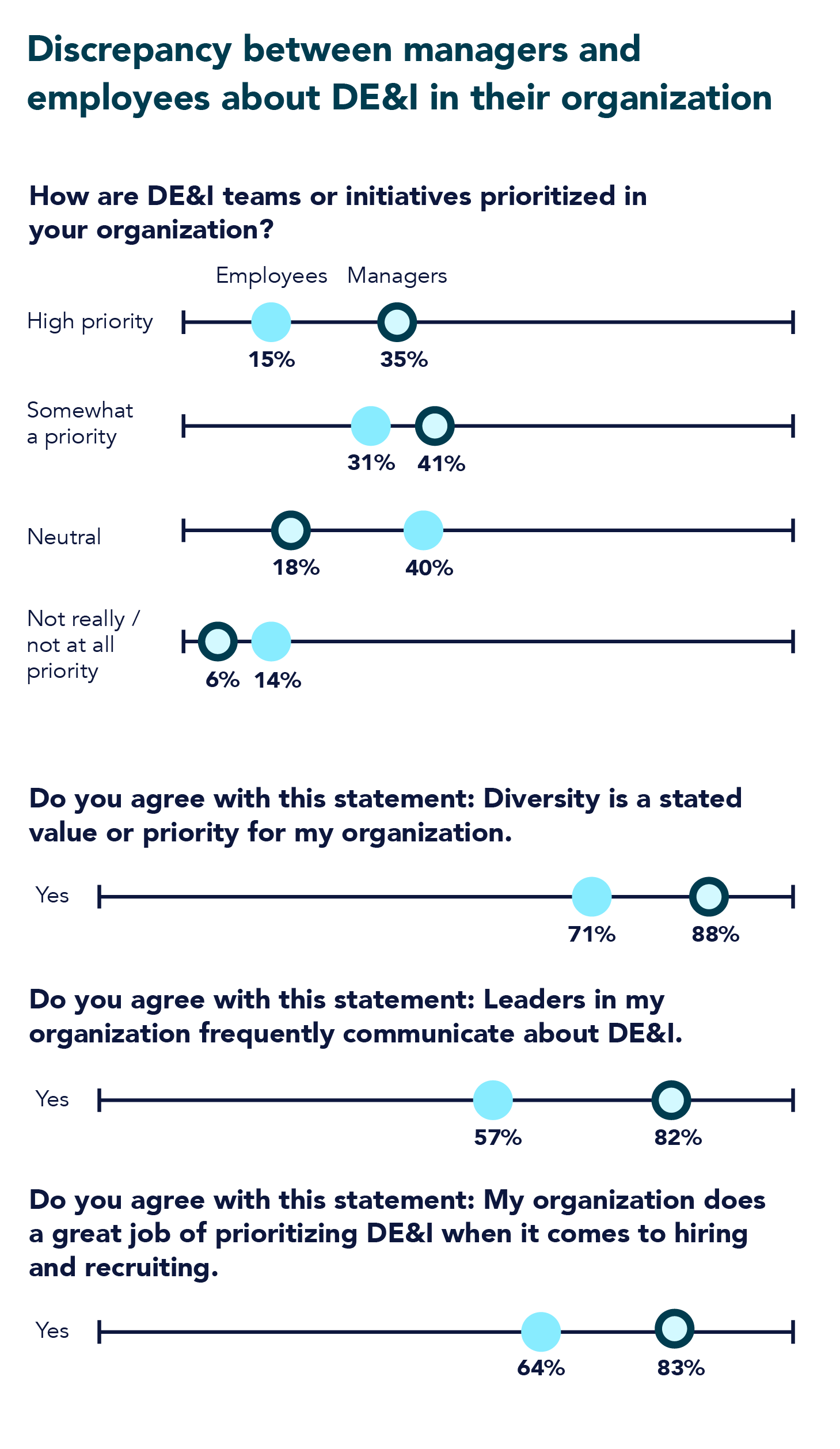 The largest divide between employees and managers is around the prioritization of DEI. Is it being prioritized by both leaders and employees? Is it a year-long effort that’s consistent in both the day-to-day workplace and during recruitment? It’s also a foundational aspect of each of the other questions asked.

Now is the time for employees, managers, and their employers to get on the same page; especially when it comes to DEI. So, let’s get after it.

As seen from above, managers and their direct reports are struggling to see eye-to-eye, so let’s start with the basics. This month’s survey found 70% of organizations have a formal DEI team in place within their organization.

And although one-third of organizations still don’t have a DEI team, they are starting to become more common – and better funded. Nearly one-half of respondents whose company has a dedicated DEI team say it has grown in the last six months; one-quarter say more funds have been allocated to the team.

As for when these DEI teams were formed, one-third of employees say before 2021, while another 40% say their company’s DEI team formed in 2021 or 2022. Why the recent uptick?

Which of the following do you think forces leaders to take action on DE&I?

Employees believe voicing their own concerns (40.2%) and external societal pressure (38.3%) were the top two factors influencing companies to take DEI action during this time. And this makes sense, considering the events of 2021 that made it so racial injustice in the United States could no longer be ignored by businesses or their leaders. That is still the case today, and top candidates are paying attention to how organizations are responding.

This month’s survey revealed the disconnect between employees, managers, and their companies when it comes to diversity, equity, and inclusion plans. It’s possible managers are better informed by leadership about the DEI initiatives within their organization. But it’s also possible the disconnect is because these initiatives aren’t making an impact where they need to be.

Whatever the root cause of this issue is, it can start to be solved with transparency and authenticity. Considering over one-quarter of employees (27.8%) are unsure where their organization stands on social justice issues, employers need to be more upfront about their action plan for tackling DEI at work.

This transparency should span every aspect of an organization’s business plan, especially hiring and recruiting. Not to mention as a retention strategy. This month’s pulse survey found:

More than one-quarter of employees from each of these groups will consider leaving if the organization doesn’t make visible changes around DEI in the next six months. Considering just how much ground diversity, equity, and inclusion covers, employers should not take this declaration lightly.

Director of people analytics at Workhuman®, Meisha-ann Martin, Ph.D. explains: “It’s like putting together a career plan for an employee without taking the employee’s input into account.” Employees know what they need better than anyone else - and it’s time for leaders to help turn what they need into a reality.

With all of this, the message to employers is clear: be transparent with your DEI initiatives, continue investing in them, and maybe most importantly, make sure to involve those closest to these DEI efforts – your employees.