This is the second post deep diving into the 5 trends that will transform the way we work in 2022 and beyond. 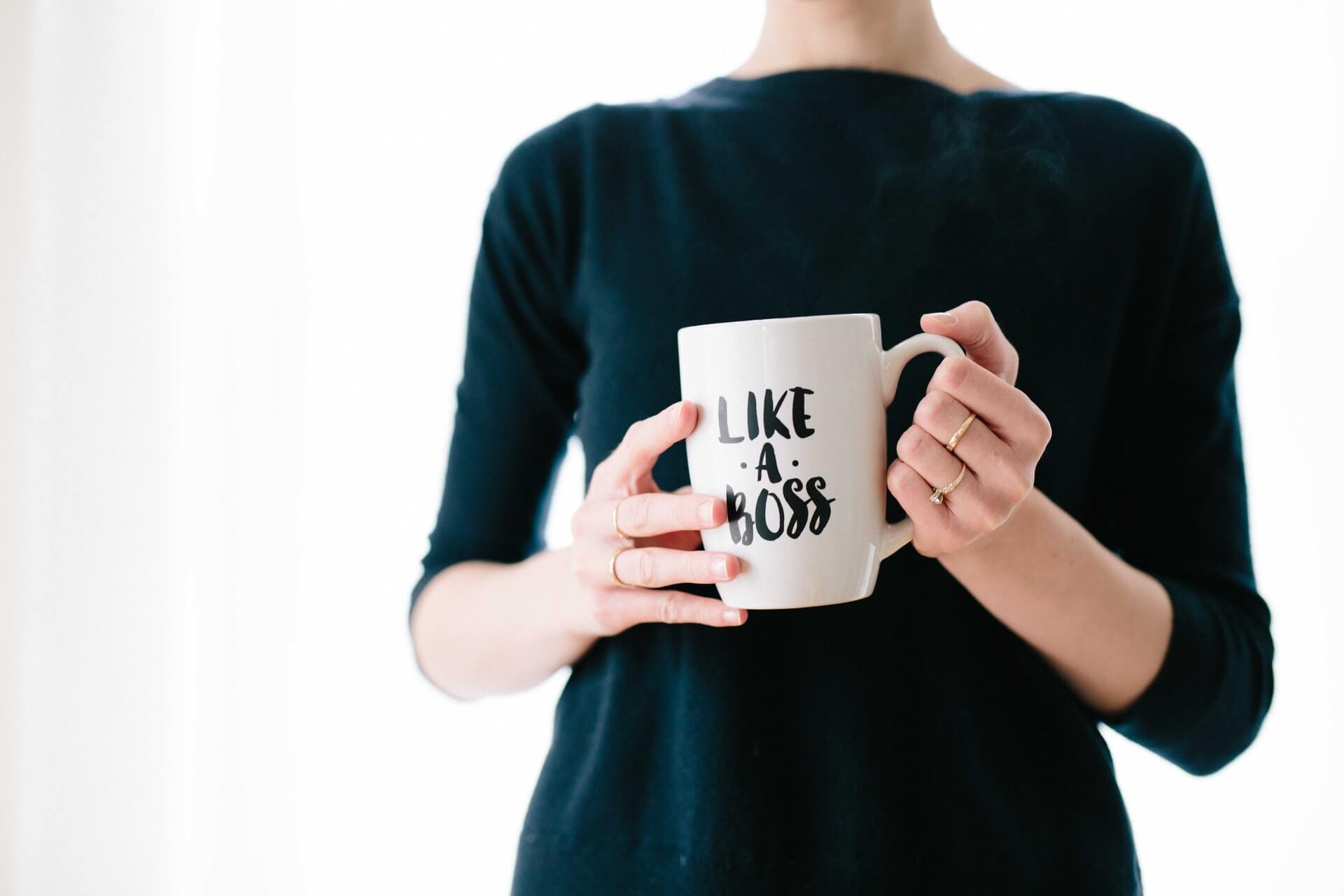 Speaking about the Great Resignation, Chris French, Workhuman® executive vice president of customer strategy, reminded us that the accelerated turnover we saw in 2021 occurred largely in service industries, such as hospitality. He predicted the exodus of workers in other industries will likely kick in and increase in the coming months. “We’ve just begun to see the turnover in other jobs by workers who – due to the cumulative effect of not interacting with humans in their company and their team – don’t have the same connection,” he observed. “And they’re leaving.”

Combine that with the fact that many employees were holding out for year-end bonuses at their current jobs, and the prospect for an easing of turnover is bleak at best. The New York Times reports that more than 4.5 million people voluntarily left their jobs in November, according to the latest Labor Department statistics. “That was up from 4.2 million in October,” the article adds. “And was the most in the two decades that the government has been keeping track.”

Two antidotes to the Great Resignation

Add it all up and it appears that in 2022 the Great Resignation will only get greater. But that doesn’t mean you have to resign yourself to losing valuable employees. Here are two key actions you can take to stem the tide, starting today:

One of the biggest turning points in my career came when I was an editor at a media company in New York City. My desk happened to be right next to the advertising and public relations department, and each day – trudging my way through monotonous manuscripts – I could hear their lively conversations as they brainstormed the next big idea. “I want to be part of that action,” I thought to myself.

Happily, the company answered my call and gave me a shot as a copywriter; I went on to have a long and successful career with the organization. Had I continued to wallow as the mediocre editor I was, I surely would have fled for a copywriting opportunity elsewhere.

Are you missing opportunities to let your current employees learn, grow – and stay – with your company?

A recent CNBC “Make It” story highlights some discouraging findings from a Randstad RiseSmart Career Mobility Report. It notes that “employees aren’t optimistic about getting promoted within their company, with 43.2% saying they don’t have enough opportunities for internal mobility.” According to the report, 48% of employees believe their managers would balk at the idea of them switching roles within the organization.

In his recent Workhuman blog, HR and talent analyst Mervyn Dinnen paints a more endemic barrier to internal mobility. “Less than 30% of companies see internal hires as an effective hiring channel,” he notes. So it’s hardly surprising that – according to a 2019 Deloitte survey – almost 60% of employees say it is easier to find a new role at another company than it is to change roles at their current employer. “

Many businesses are so fixated on external hiring that their people must leave to get the development they need,” observes Mervyn. “This is a missed opportunity, as research regularly shows the number one reason people join and stay with a business is because they want to learn, grow, and develop new skills and capabilities.”

When employees flourish, they stay.

Mervyn goes on to delineate four reasons why HR needs to embrace internal mobility and make it a priority in the coming year. Among these reasons – it sends the message, “I believe in you,” and in this way supports a culture of recognition. “If you want to retain your people and help them develop, internal mobility needs to re-emerge as an HR priority,” he notes. “It is good for business and good for engagement.”

It wasn’t so long ago that the idea of a “boomerang employee” – a worker who leaves a company and later returns – was a bit of an anomaly. In fact, there was often a stigma attached to such employees – a perception that they couldn’t “make it” outside the cocoon of their original organization.

There were other barriers for returning workers, as well. “It used to be thought that, should an employee have the temerity to seek employment elsewhere, they would permanently burn their bridges and with them, any chance of harmonious relations with their former employer,” notes Pavel Krapivin in his Forbes article.

While the trend towards hiring boomerang employees has grown in recent years, it really took off in 2021 – thanks in large part to the Great Resignation. A recent Wall Street Journal article cites data from Workhuman client LinkedIn, showing that the number of boomerang workers has increased in companies using its platform this year.

“Boomerangs accounted for 4.5% of all new hires among companies on the professional networking website in 2021, up from 3.9% over the same period in 2019.” In fact, LinkedIn itself jumped on the boomerang bandwagon this year, hiring twice as many former employees compared to 2019.

Research makes the case for boomerangs.

Faced with a sudden onslaught of vacancies, talent acquisition personnel have turned to recruiting former workers in numbers not seen before. There are many reasons why. Citing research from Cornell University, Pavel delineates some of the benefits an organization realizes when it brings back a former employee. The findings show that boomerangs are better able to:

The report concludes that organizations – especially large companies – should be tapping their alumni network as a source of new talent. Unfortunately, many companies fail to keep track of former workers or maintain good relationships with them.

Oh, and by the way, bringing back former employees isn’t the automatic “slam dunk” some may think it is. As Jack Kelly points out in his Forbes article, companies need to do their due diligence on why the person left in the first place. And they need to recognize that some returning employees may feel it’s a regression in their career.

Then there’s the issue of compensation and benefits. Employees are in a prime position to negotiate the terms of their return, according to Jeff Cochran of the Shapiro Negotiations Institute in a WCNC Charlotte article. “Not only do they try and negotiate their salary, but they’re also very aware of what the working conditions are, some of the things that they can ask for to make their lives easier.”

Don’t resign yourself to the Great Resignation.

In her recent blog, Sarah Bloznalis argues that “organizations should focus on internal mobility – and provide current employees with the training and skills needed to move into more senior roles.”

In the same way, organizations need to take a fresh look at former employees as a rich source of talent. In doing so, they can mitigate the impact of exiting employees. “The situation can be mutually beneficial to employees and companies,” notes the Wall Street Journal article. “For workers, many have been able to secure a higher salary and a promotion with elevated responsibilities. Employers have the opportunity to bring back proven workers.”

Next week, we will dive into our third trend for 2022, recruiting in the new world of work. 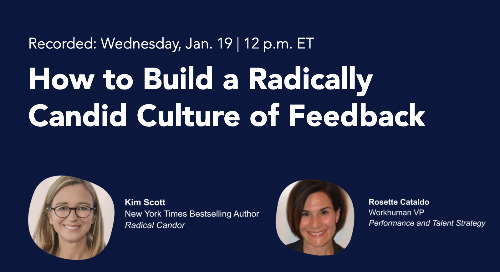 In this webinar, Kim Scott explores how organizations can create a human-centric, performance development c... 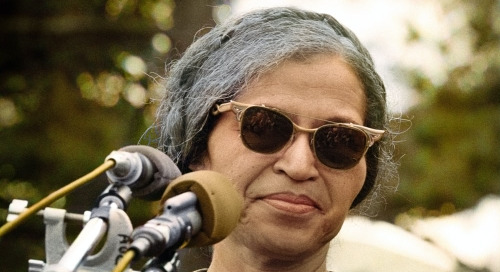 Rediscover Rosa Parks' amazing journey from humble beginnings in the segregated South, to her international...