What is a boomerang employee?

It wasn’t so long ago that the idea of boomerang employees – workers who leave a company and later return – was a bit of an anomaly.

In fact, there was often a stigma attached to such employees – a perception that they couldn’t “make it” outside the cocoon of their former employer.

There were other barriers for returning workers, as well. “It used to be thought that, should an employee have the temerity to seek employment elsewhere, they would permanently be burning their bridges and with them, any chance of harmonious relations with their former employer,” notes Pavel Krapivin in his Forbes article.

Why do employees boomerang?

Let’s face it … despite all good intentions and due diligence, the hiring process — for both the hiring organization and the candidate —  is fraught with uncertainty.

Even after an exhaustive interview, extensive screening and new hire onboarding process, a worker might discover a host of factors in the new job that don’t measure up to her former role.

Perhaps the company culture isn’t what she thought it would be.

The role wasn’t as advertised.

The benefits aren’t as great.

There are less opportunities for career advancement.

Or, the work-life balance can’t measure up to those of her former employer.

Add it all up, and you’ve got a recipe for a worker to become a boomerang employee.

How common are boomerang employees?

While the trend towards hiring a boomerang employee has grown in recent years, it really took off in 2021 – thanks in large part to the Great Resignation. A Wall Street Journal article cites data from Workhuman client LinkedIn, showing that the number of boomerang workers has increased in companies using its platform last year.

“Boomerang employees accounted for 4.5% of all new hires among companies on the professional networking website in 2021, up from 3.9% over the same period in 2019.”

In fact, LinkedIn itself jumped on the boomerang hire bandwagon in 2021, bringing back twice as many former employees compared to 2019.

Workhuman® iQ polled more than 3,500 workers in the U.S., U.K., Ireland, and Canada to analyze How the Great Resignation Will Shape HR and the Future of Work. 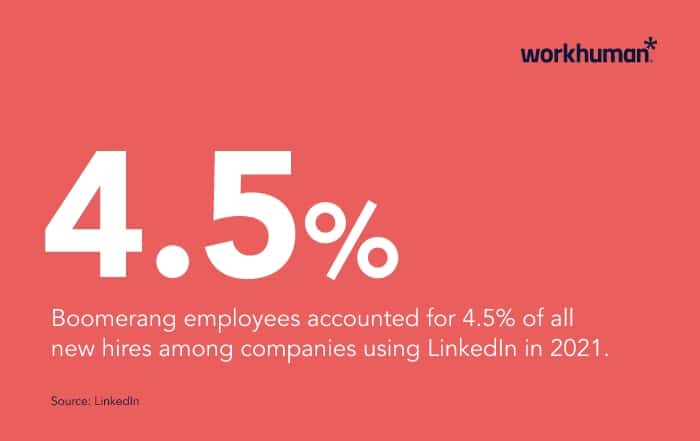 Speaking about the Great Resignation, Chris French, Workhuman® executive vice president of customer strategy, pointed out that the accelerated turnover we saw in 2021 occurred largely in service industries, such as hospitality.

As he predicted, the exodus of workers in other industries kicked in and increased employee turnover at the beginning of 2022.

Combine that with the fact that many employees were holding out for year-end bonuses at their current jobs, and the decline in turnover rates was slower than what employers might have hoped for.

The New York Times reports that more than 4.5 million people voluntarily left their jobs in November 2021, according to Labor Department statistics. “That was up from 4.2 million in October,” the article adds. “And was the most in the two decades that the government has been keeping track.”

And while we’ve seen some easing of the Great Resignation in 2022, companies still face the very real risk of losing employees as they navigate policies surrounding the return to physical office space.

An article in The New York Times predicts that, as companies require workers to return to offices, “It’s either the end of the era of flexibility around where work takes place — or the beginning of outright rebellion.” 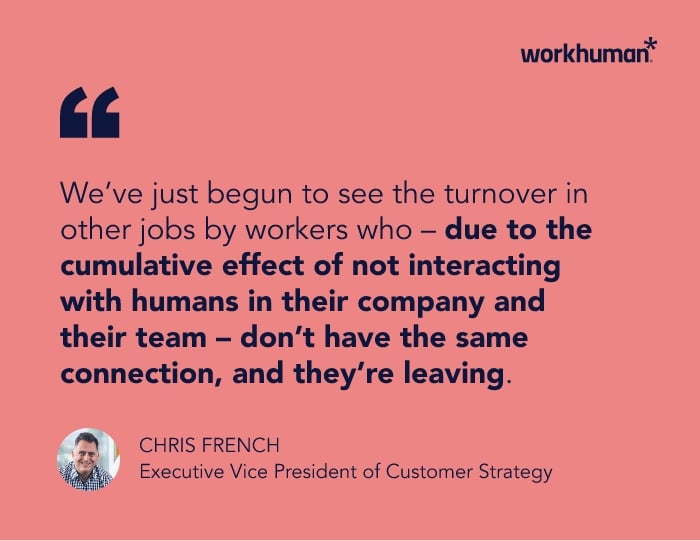 The advantages of hiring former employees

Faced with a sudden onslaught of vacancies, HR professionals in 2021 began recruiting former workers in numbers not seen before. There are many reasons why.

Citing research from Cornell University, Pavel delineates some of the benefits an organization realizes when it brings back a former employee. The findings show that boomerangs are better able to:

The report concludes that organizations – especially large ones – should be tapping their alumni network as a source of new talent. Unfortunately, many companies fail to keep track of former workers or maintain good relationships with them.

Against this backdrop, it’s easy to see why the supposed stigma surrounding boomerang employees has lessened significantly. In fact — in today’s tight labor market — some now see hiring previous employees as a smart business strategy.

“There’s a need for the business community to be more open to investing in humans who will work hard and thoughtfully for those few years, and who may even come back.”

What to consider when hiring boomerang employees

Hiring a boomerang employee isn’t the automatic “slam dunk” some may think it is.

As Jack Kelly points out in his Forbes article, companies need to do their due diligence on why the person left in the first place.

And they need to recognize that some returning employees may feel it’s a regression in their career.

Then there’s the issue of compensation and benefits.

A boomerang employee is in a prime position to negotiate the terms of her return, according to Jeff Cochran of the Shapiro Negotiations Institute in a WCNC Charlotte article. “Not only do they try and negotiate their salary, but they’re also very aware of what the working conditions are, some of the things that they can ask for to make their lives easier.”

How can HR cultivate the boomerang effect?

1. Provide a great employee experience — the first time around

As we noted above, it makes sense for organizations to tap into their alumni network — especially in a time of historically low unemployment rates.

But the truth is, no one will want to return to a toxic company culture at former employers. So if organizations want to successfully recruit and rehire those who have left, they have to deliver a positive employee experience during the employee’s original tenure.

That’s one of many reasons why it’s incumbent upon companies to foster a positive company culture and deliver a superb employee experience.

2. Create a positive off-boarding experience — while celebrating the employee’s opportunity

No one relishes seeing a quality employee leave an organization. But how leaders, including HR professionals, handle the moment has far-reaching repercussions for both the departing worker, and others throughout the organization. Because believe me … peers are watching.

We’ve all seen it … a departing employee who is stigmatized and ignored in the final days before he leaves the organization. What does that do for company culture and employee engagement?

How much better would it be to show gratitude for the contributions that worker has made, and celebrate the opportunity he has to advance his career journey?

Apart from the positive impact that has on company culture, it makes it much more likely that — should the opportunity ever arise — that same worker will openly entertain the possibility of returning to your company.

In the days before the worker has left the organization, managers should graciously make it known to the departing employee that the door is always open for a return — either in the same position, or in a new role.

And once the employee has left, it’s important to keep the lines of communication open and active.

It’s also important to strike a balance between actively recruiting the former employee — that could turn off the worker — and maintaining a vibrant, natural connection.

In the end, it all comes down to the fact that burning bridges works both ways. Be sure your organization is not the party putting a torch to the benefits of boomerang employment.

Taking a fresh look at the boomerang employee

For those wondering how the Great Resignation will affect the rate of boomerang employees, the answer is that it will likely depend on the individual scenarios.

Workhuman’s Human Workplace Index found 72% of workers surveyed believe the Great Resignation is creating a positive change in the workplace.

But some workers who left their employers in search of something better may come to realize the grass isn’t always greener on the other side.

Because of this, the next era of work will likely see an increase in these boomerangs.

These employees may have left 12 months ago, or even 12 years ago.

Whatever the reason, the gained experience and prior connection to the organization will benefit both the employees and their employers.

“The situation can be mutually beneficial to employees and companies,” notes the Wall Street Journal article. “For workers, many have been able to secure a higher salary and a promotion with elevated responsibilities. Employers have the opportunity to bring back proven workers.”

How can your organization be one that employees want to come back to?

Read the free Gallup-Workhuman report “Unleashing the Human Element at Work: Transforming Workplaces Through Recognition” to find out how.