Seeing as the 2021 Global Leadership Forecast reported that only 11% of surveyed organizations had a bench of emerging leaders, it appears that many companies could benefit from studying some feedback for leadership examples.

The problem is largely due to a lack of development programs and effective feedback systems. Existing leaders are accustomed to giving feedback to their juniors, but they should also expect employee feedback in return.

This looping manner of positive and negative feedback for leadership is essential for two-way continuous performance management, in which meaningful feedback interactions occur regularly, reflectively, and conversationally for both managers and those they supervise.

Typically, these are soft skills — abstract personal qualities rather than concrete, technical knowledge — such as communication, decision-making and critical thinking, and confidence.

It’s important to talk about leadership skills as part of the performance management process because the process itself is all about building individuals into stronger contributors to the organization, thereby strengthening the organization overall.

Meanwhile, constructive feedback for junior employees can empower them to take on more responsibilities, which distributes leadership power through all levels of the organization. Efficiency and productivity are likely to improve as a result.

That’s not to mention the effects on morale and accountability. An honest evaluation of an individual’s leadership qualities is, for one thing, an acknowledgment of their value to the organization.

For existing leaders in an organization, leadership feedback often begins with self-evaluation. During a self-evaluation, a leader reflects not only on their own performance but also on what it means to be an effective leader.

In fact, one can’t evaluate the former without first determining the latter, as the basis of a constructive self-evaluation is the question of whether a leader meets the requirements of the position.

So, to begin, a leader might consider, “What is the function of a leader?” and then, “What are key leadership skills and traits?” Generally speaking, a leader’s function is to instill in others the motivation to work toward a set of common objectives.

Among other things, that requires the leader to understand the unique needs of each of their juniors, empathize with them to build relationships, present a strong example by taking initiative, exhibit an authority that others can simultaneously respect and relate to, demonstrate trustworthiness, and exhibit a willingness to take responsibility for their team’s shortcomings.

From there, one can translate each of these qualities into a question. For example: 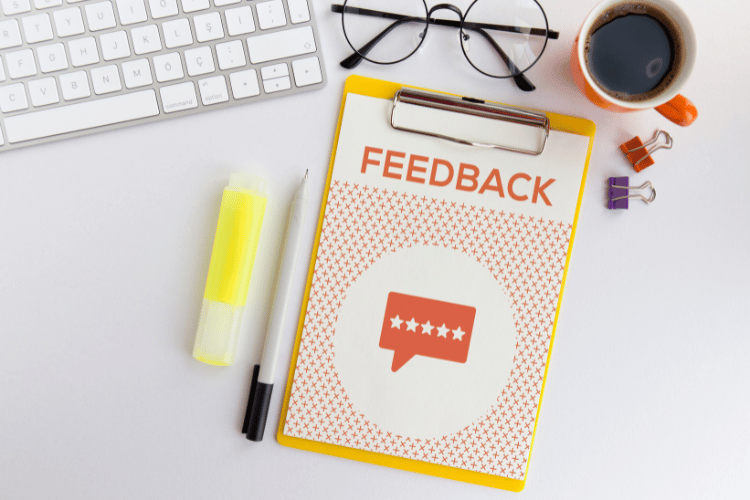 When you’re seeking feedback about your suitability as a leader, you want to be sure that you’re as thorough as possible. After all, many might consider comprehensiveness to be a key leadership quality.

To that end, consider these five feedback for leadership examples to help you anchor your performance development conversation.

Some people like a hands-off leadership style. They may commend you on your ability to trust your direct reports or colleagues. Others, though, may prefer direct guidance, as they could be uncertain about how to address unfamiliar tasks.

In the latter case, they may not appreciate a hands-off approach. Rather, they may want you to take more involvement in their development with regular check-ins and one-on-ones.

The need for recognition

Recognition is essential for employee engagement and morale. You may receive positive feedback commending you for your recognition of others’ contributions.

On the other hand, some individuals may feel that you don’t give enough recognition. Either way, it’s important to understand the value of your feedback for others, both positive feedback and critical feedback.

The topic of workloads can go three ways. Ideally, you’re delegating tasks in such a way that every team member is appropriately challenged without feeling overwhelmed.

If not, either they’re inundated with tremendous workloads and unreasonable deadlines, or they find their tasks underwhelming and tedious. In the latter two instances, you’ll want to redistribute priorities to achieve a balance.

Many current and potential leaders have attained their positions by prioritizing work ahead of other pursuits. That’s fine for some, but it would be unreasonable to expect the same from everyone.

Some individuals may complain that their job has left them with little time to themselves. On the flip side, others may want to become more involved in the organization.

Conflicts are common in team settings, and it’s the responsibility of the leader to resolve them. If someone discusses team conflicts in their feedback, that’s an indication that you may need to work on your problem-solving and interpersonal skills.

If the conflict is something that has escaped your attention, you may also have to develop stronger skills of observation or empathy.

Many employees may feel uncomfortable providing constructive feedback to their leaders given the power dynamic between them. Fortunately, as the research of Gary Oldcorn and Darryl Forsyth has shown, senior leaders tend to have a positive perception of upward feedback.

They feel that it’s a constructive tool that affects “leadership improvement.” If a supervisor is willing to invite their juniors to give them leadership feedback, they’re likely to be willing to consider the feedback objectively.

Research by leadership consultants Jack Zenger and Joseph Folkman would appear to corroborate those findings. According to them, a common attribute among the best leaders is a commitment to feedback.

They found that “leaders who ranked at the top 10% in asking for feedback were rated, on average, at the 86th percentile in overall leadership effectiveness.”

However, as Jennifer Porter points out in the Harvard Business Review, the challenge is the feedback many leaders receive is not helpful, resulting in frustrated leaders who may stop asking for feedback altogether.

But the good news is that leaders can encourage better feedback through specific actions. The objective is to create a workplace culture built on trust. When the members of an organization truly trust one another, they’re much more open with their critiques.

Here are some feedback for leadership examples for both leaders and their employees to create a healthy 360-degree feedback conversation.

Most team members aren’t going to offer negative feedback voluntarily, especially when the leader is essentially in control of their future at the organization.

That being the case, one of the most powerful ways for leaders to grow is to ask for feedback directly from the individuals they interact with frequently. That includes both colleagues and direct reports.

When leaders ask for feedback, they’re openly permitting others to be critical, resulting in more actionable and realistic insights. This method of direct solicitation offers more control over the conversation, as well as certainty in what will be discussed.

For many, the thought of giving their leader feedback is enough to send them running for the hills. Sharing feedback can be interpersonally risky. Leaders need to show their staff that their honesty will not be met with negativity but rather with positivity.

The process of creating such an environment begins long before any continuous performance development conversation. It’s only possible by consistently rewarding candor and demonstrating that the workplace culture values honest criticism.

Working in a psychologically safe environment encourages others to provide growth mindset feedback — a critique predicated on the understanding that individuals can develop their abilities through effort and perseverance. They offer their feedback with the desire to see another person grow and welcome others to help them grow in the same way.

When someone gives feedback, the receiver should work to eliminate distractions and focus on the giver. That means active listening and resisting the impulse to respond immediately to feedback.

Instead, one should absorb the information and spend time reflecting on it, even if they don’t initially agree with it. Then, at the end of the discussion, the feedback receiver should thank the feedback giver for their insight.

Feedback without action is inert. To extract maximum value from a feedback conversation, an individual must apply it to action. Here are what current and potential leaders can do to move forward with the feedback they’ve received.

The post-conversation period is when you should reflect on the feedback you’ve received and evaluate the veracity of each item discussed. This involves a fair bit of self-awareness and honesty.

Instead, deeply consider every bit of feedback. Take for granted that both positive and negative critiques are valid and then try to prioritize areas of improvement. As you do so, ask yourself questions like:

Feedback conversation doesn’t take place in a vacuum. It addresses the past and the present, and it can certainly extend into the future.

This manner of focusing on the future is a practice known as feedforward. For example, if you received feedback concerning your struggles with delegation, you can ask for suggestions on how to handle the problem should it arise in the future.

Now it’s time to show that you’re willing to take responsibility for your past shortcomings and improve on them. That’s what people with leadership qualities do, and it’s a signal to those who gave feedback that you value their perspectives.

To turn feedback into action, give yourself specific goals. For example, if others tell you that you’re less than diligent about communication, make it a point to record and convey every important detail about a project to your team.

This could be as simple as a thorough and consistent list-making exercise that involves noting, prioritizing, and then disseminating key information on a regular basis. Lynne Levy is a Workhuman evangelist who lives and breathes helping organizations build cultures that bring out the best in the employees. Her mantra is “do what you love, love what you do.”