The final month of the year is a time for reflection – in our personal lives, yes, but also professionally. It’s the season of annual reviews and final check-ins and holiday gatherings. At home and at work, employees are looking back on their year in preparation for the next.

This month’s Human Workplace Index (HWI) will do the same. We’ll review where we started the year, where we are now, and where the workforce wants to go next. Using these insights, business leaders can better understand the feelings and concerns of their employees, making them better equipped to build a better workplace for them going forward.

Even when research consistently shows the wide-ranging benefits of embedding gratitude and recognition into company culture, leaders consistently overlook the value of feeling valued.

Employers shouldn’t take this notion lightly, especially when they look at their employees’ regrets from the past year. Among the top regrets: one-third regret working too much and one-quarter regret not setting boundaries, meaning it’s only going to become more difficult to retain workers without valuing them as humans in addition to the work they do.

On the note of retention, one regret employees didn’t have was leaving for a new opportunity. Only 4.3% of survey respondents regretted quitting for a job that didn’t end up being better, an overwhelming sign that those who partook in the Great Resignation aren’t having great regrets.

In July, as inflation and oil prices spiked, we began asking employees about how macroeconomic issues and a potential recession were shaping their perception of work. Unsurprisingly, general feelings of concern and anxiety surrounding economic uncertainty haven’t gone anywhere since then.

And while about one-fifth of employees cited feeling secure in their jobs despite an economic downturn because their industry is in high demand or their company is short-staffed, nearly 62% of workers are worried that they may lose their job if a recession were to occur in the United States.

Many of these workers, however, have already begun preparing for the potential recession; this month’s survey found one-half of employees have taken on a side hustle or freelance role in the last year – in addition to their full-time job. This concept of “career cushioning” may be a trend we continue to see as employees attempt to prepare for the uncertain. 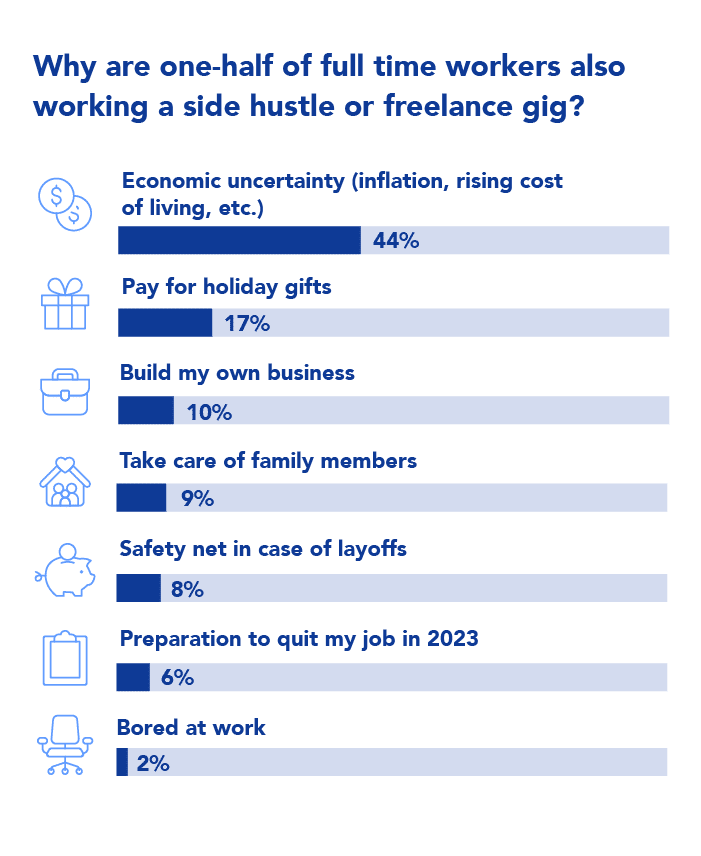 Economic uncertainty and the subsequent tightening of purse strings is inevitable in the world of work, and all too often that involves budget cuts that directly affect employees. Even amidst uncertainty, organizations can get the best out of their employees by ensuring they are supported mentally, physically, and financially.

And it looks like that desire for support is only going to get stronger as we move into 2023. When we asked employees about their 2023 resolutions for themselves at work, the top five responses were:

As seen from those responses, nearly one-half of employees are hoping for a promotion or raise next year, and nearly one-third are looking to find a new, better paying position.

But concerns around finances aside, most employees seem motivated for the year ahead, as seen by the latter three responses. Workers are focusing less on external factors and more on what they can control through things like becoming more organized and setting boundaries in the workplace.

According to this month’s survey, approximately one-third of employees have consistently positive expectations for the year. In fact, survey respondents are 3x as likely to believe employees will be more vocal about their needs in the workplace in 2023 (29.2% and 8.3%, respectively).

When asked about the return to in-person work, 29% of workers think more employers will require employees to come back to the office, while about half as many believe employers will become laxer about returning to the physical office.

Continuing with new year predictions, we also asked respondents to finish this sentence: “2023 will be the year of…”

Of the 1,000 responses, the major themes included:

No one is certain what 2023 will look like, but it seems like there are a few things employees are ready to agree on. The most common theme is that despite the economic pressures employees are up against, they are going into the new year with a sense of cautious optimism and hope. 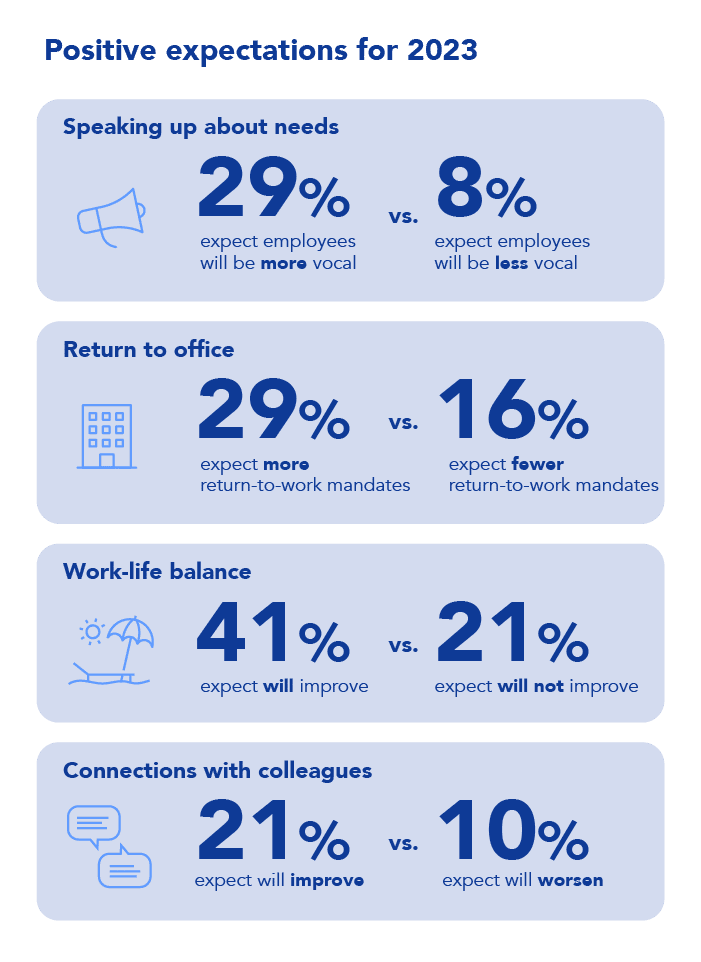 And with these responses garnered from real employees, employers can be better prepared for what is to come and what their employees are expecting. And considering nearly one-half of those looking to leave their companies would like to do so in the next 90 days (48.1%), employers should act fast.

So, whatever 2023 brings, forward-thinking business leaders should be actively working to make it the year their employees can reach their full potential – allowing employees and employers to thrive in the face of whatever challenges arise next.