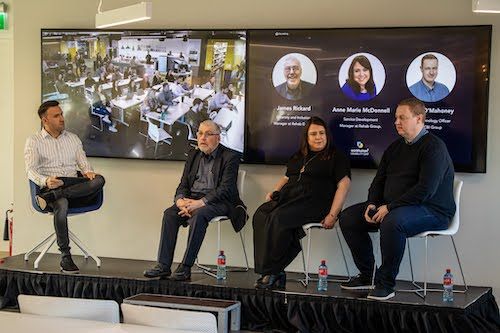 What first comes to mind when you think about diversity and inclusion? For me, I associate it with issues of gender and race.

So it was a bit of an eye-opener when I attended “Building Accessible Products” – a recent Workhuman® panel discussion on how companies can advance technology that is more inclusive for those with disabilities. Part of Workhuman’s Usability Day, the panel looked at the obstacles facing those with a physical challenge – while exploring opportunities for organizations to address those challenges through technology.

Together, they unmasked the reality of navigating technology for those who have a disability or visual impairment, and examined some of the steps forward-thinking companies can take to build products that are more inclusive – products that actually embrace differences in ability.

When asked to identify some of the challenges surrounding accessibility in today’s world, James – who lives with cerebral palsy – framed the discussion in a powerfully poignant statement: “I don’t see myself as a disabled person. I recognize that I’m a person with a disability.”

He recalled how the educational system seemed better prepared to accommodate his needs, making college possible. But when he began to seek employment, he ran into roadblocks. As he notes in an article for “The Irish Times,” “It took many years of effort and frustration until I found an employer willing to take a risk on my abilities, and adapt the work environment to enable me to use my skills to fully contribute to their goals.”

As a visually challenged person, Kyran drew on firsthand experience: “No kid wants to be the kid that sits in the front of the class to see the board. You don’t want to draw attention to yourself. You’re trying to keep up with everyone else. It’s very draining.”

But a game-changer came for Kyran while he took an online course. It was, as he put it, “a light-bulb moment.” Because the program was self-paced with the screen in close view, he could participate in the program independently, without help.

Ger then asked the panel their thoughts on how technology has progressed, and the impact it has had on people with disabilities. Kyran noted that when you haven’t had something in your life, and then technology makes it possible, it’s “life changing.” He cited the example of audio books.

He used to tell people, “I’m not a reader.” But now that audio books are available, he “consumes” books. “That’s not a specific piece of technology that was designed to be accessible,” he pointed out. “It’s just inclusive because it’s available to me – the same as everyone else.”

Kyran noted that incorporating accessibility into new products is often a low priority for those who develop them. And yet according to him, it is estimated that 15% to 20% of the population has some form of disability.

He cited Apple as an example of a company that approaches accessibility in a progressive way: “As an organization, Apple challenges itself to be accessible from the ground up. At the outset, they ask their engineers, ‘How are we going to make this accessible?’”

Apple TV+, for instance, has audio description in more than 14 languages. “If you’re building a product or having a product launch, ask yourself: ‘Is this really accessible?’ And if it’s not, it’s not ready.”

“It goes beyond technology,” added Anne Marie. “There are so many practical, day-to-day things that we miss when we talk about being accessible and being inclusive.”

Ger then displayed a photo of a button he came across, outside a shop in Dublin. The button read, “Press For Help.” Presumably, when the button is pressed, someone from the shop comes outside and assists the person up the steps and into the store. Ger then asked the panel for reactions to this image.

“The worst thing I ever have to do is ask for help,” said Kyran. “I hate having to be in a position to say I can’t overcome something. It’s the difference between accessibility and inclusion.”

James echoed this same emotion in his “Irish Times” article when he observed, “The classic case of inferiority is when you allow someone to assist you to do something you can easily do yourself.”

Kyran recounted the excitement he felt when he realized he had traveled from Dublin to New York without once asking for help. “To get from one place to another without asking for help – that’s the ultimate inclusion.” Or, as Ger put it, “Inclusion is not being treated differently.”

Ger concluded by asking the panel what they hope future technology looks like for people with needs. For Anne Marie, it’s a world where mainstream technology enables independence and personal safety.

She shared her hope that, moving forward, companies will reach out to universities to attract students who have lived with a disability, and recruit them to become future product designers, testers, and leaders. As she put it, “Around the country in so many universities, there are many young people with disabilities who can become testers and product developers. People who will be able to share from lived experience of what it would be like. People who will be able to put a totally different spin on it and become part of development teams.”

And as James writes, “I feel it is time to move beyond the rhetoric of the individual versus society. It is time to embrace the challenges which a disability may present. In the social sphere, one would hope, in an ever-increasingly diverse society, people with disabilities will be supported to become more engaged and active in their communities.”

In the end, it’s about how technology can be a profound driver of inclusion. How it can help people with challenges. How it can – as Kyran put it – help them be “the same as everyone else.”

Because as James noted in his “Irish Times” article, “The experience of a disability – and the identities which stem from it – is a fundamental part of human diversity and therefore should be incorporated into the lived experience of being human – not something separate from it.”

A Deeper Dive Into Diversity and Inclusion

The Why Behind D&I: How Diversity and Inclusion Initiatives Benefit Business 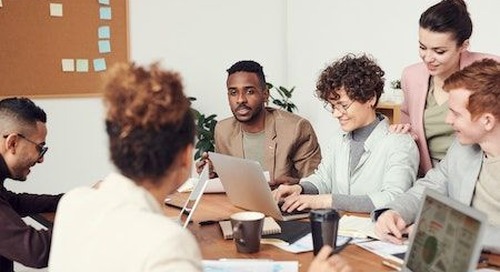 What happens after your recruiting team finds the most diverse and brilliant minds? What will their experie... 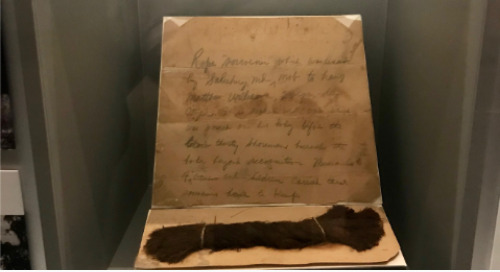 Deborah Tulani Salahu-Din, an exhibition researcher, shares a story about the artifact that speaks to her m...