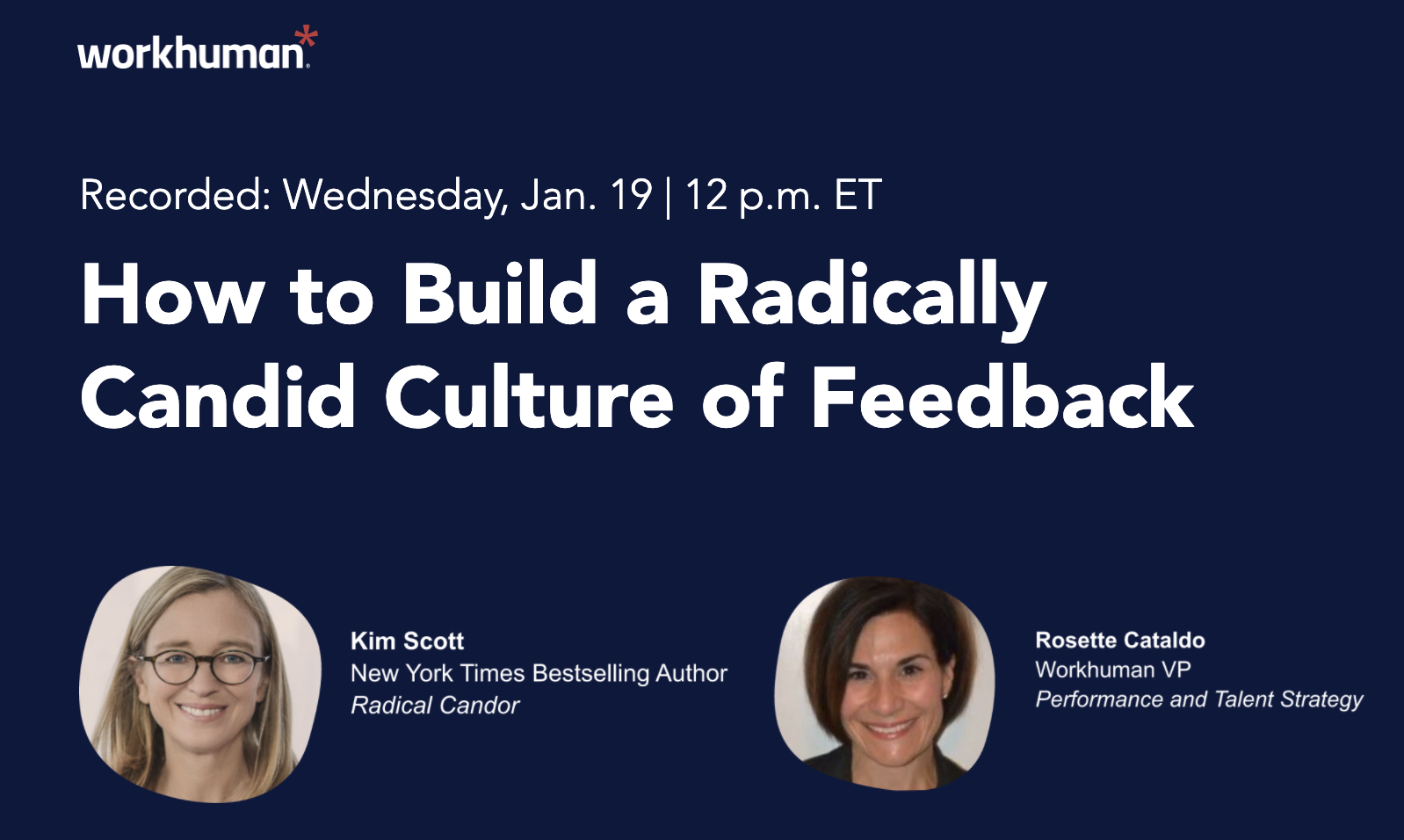 “At the core of good management is a good relationship,” observed Kim Scott, author of The New York Times bestseller, “Radical Candor.”

What is Radical Candor?

“The essence of Radical Candor – the essence of that relationship – is Caring Personally while Challenging Directly at the same time,” noted Kim. “Your job as a leader is to create a culture of feedback; to build a team on which everyone is taking a step in the direction of their dreams and getting stuff done. And if you think you can do that without having good relationships with each of your reports, you are kidding yourself.”

Calling her “stupid” was an act of kindness

Kim shared a personal story about the time she gave a presentation to Google founder Sergy Brin and CEO Eric Schmidt, updating them about the progress of the company’s AdSense business. When she reported how many customers they had added in recent months, “Eric almost fell off his chair” at the good news.

But rather than a high-five after the meeting, Kim’s boss – Cheryl Sandberg – asked Kim to meet with her. Cheryl pointed out that Kim said “um” a lot, and suggested she work with a speech coach, courtesy of Google. When Kim attempted to twice brush it off as just a minor verbal tick, Cheryl knew she would have to be more direct: “’When you say ‘um’ every third word, it makes you sound stupid,” she told Kim.

“Some people might say it was mean of her to say I sounded stupid,” observed Kim. “But in fact, it was the kindest thing she could have done for me at that moment in my career.”

Why was Cheryl able to be so direct with Kim – when others couldn’t or wouldn’t? After all, she had been giving presentations for years. “I realized it really boiled down to these two things: Care Personally. I knew that Cheryl cared about me – not just as an employee – but as a human being.”

The essence of Radical Candor

Those familiar with Kim’s work will recognize the phrase “Care Personally” as one of the axes of her Radical Candor framework – bisected by “Challenge Directly.” In fact, Radical Candor is defined as a management philosophy based on Caring Personally while Challenging Directly. 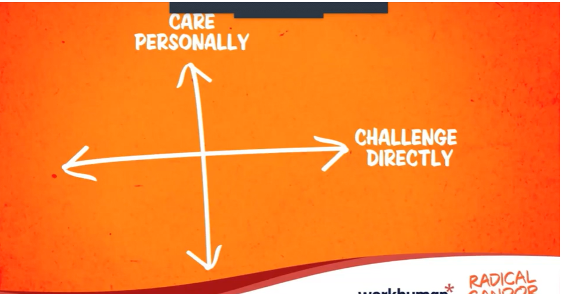 “People think they have to wait and not Challenge Directly until after they’ve shown that they’ve Cared Personally,” she noted. “But very often, the seeds of trust – the way you build a relationship – is by offering Radical Candor, which includes some Challenge Directly.”

Kim used the example of having lunch with a new acquaintance – and noticing she had spinach in her teeth. Worse yet, that acquaintance was about to go off to a very important meeting later in the day. How would you handle the situation?

“I know that I’ve got to tell you,” Kim pointed out. “Because if I don’t, you’re going to go to the bathroom and think, ‘Gosh, why didn’t Kim tell me? Doesn’t she have my back?’ And so the seeds of trust are actually sewn in both soliciting Radical Candor and in giving it. You don’t have to wait until after you’ve built this great relationship.”

As Kim sees it, people are often reluctant to embrace Radical Candor because it feels mean. But in fact, it’s an act of generosity – one that shows we care about the other person.

The conversation then pivoted to an examination of the other three quadrants in Kim’s methodology. In doing so, she noted that it’s important to give names to what happens when we fail on the Care Personally or the Challenge Directly dimensions. She advises us to “use this framework like a compass to guide specific conversations with specific people to get to a better place.” 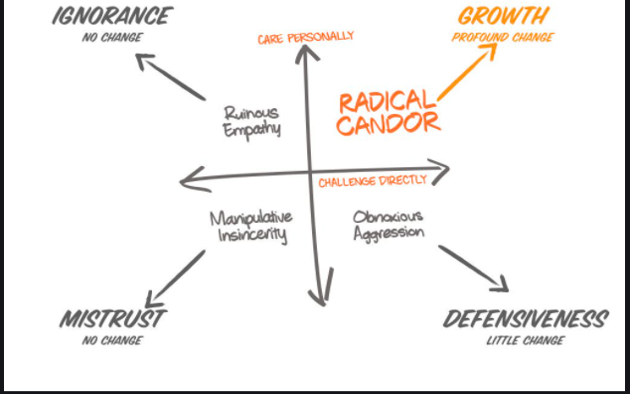 Ruinous Empathy – Those times when we are so concerned about not hurting someone’s feelings that we fail to share information they’d be better off knowing. (See the spinach-in-the-teeth story above.)

Manipulative Insincerity – Kim called this “the worst of all places” because it is neither caring nor challenging. “It’s where political behaviors thrive, where the most toxic kinds of workplace behavior, get introduced.”

Obnoxious Aggression – Those instances when we remember to Challenge Directly, but fail to show that we Care Personally.

While Radical Candor leads to growth and profound change, the other quadrants take us down a path of ignorance, mistrust, and defensiveness. And little or no change.

The interplay between Radical Candor and DE&I

Rosette asked how Radical Candor plays into DE&I initiatives: “Where does this fall into gender, ethnicity, and everything else we want to be mindful of as we create inclusive environments?”

Kim has some strong feelings on the subject, and in fact, her book, “Just Work,” explores this very topic. In her view, “sometimes people offer what they claim is feedback, but it’s not feedback. It’s bias, prejudice, or bullying.”

She shared the story of a former colleague – a Black woman who was the CEO of a tech company – who said to Kim, “I’m excited for Radical Candor. It’s going to help me build the kind of culture I want. But I have to tell you … it’s much harder for me to roll it out than it is for you.” The CEO went on to explain that when she offered even the most compassionate and gentle criticism, she would get hit with the “angry Black woman stereotype.”

“When she said this to me, it was a real act of generosity because it gave me several revelations at the same time,” recalled Kim. “I had not been the kind of colleague that I wanted to be. I had not stood up to this kind of injustice. I had failed to notice the extent to which she had to show up at every meeting unfailingly cheerful and pleasant.”

4 key steps to creating a culture of feedback

Kim closed the program with four key steps we can take in creating a culture of feedback:

Solicit feedback, especially if you’re a leader – Demonstrate to your organization that you’re eager for feedback, and demand that people give feedback.

Focus on the positive; create a culture of praise – Workhuman’s tools help people do both.

Share critical feedback when necessary so people can improve – Let people know when they are making a mistake, so they can fix it in the future.

Encourage clean escalation – Ensure you are creating a culture in which people don’t backstab one another.

Learn how you can bring agile performance development and a culture of feedback to your organization with Conversations® from Workhuman.

Next up! Kim and Rosette answer attendee questions on how to create a human-centric, performance-development culture that’s rooted in feedback. Watch for it in an upcoming Workhuman Blog!