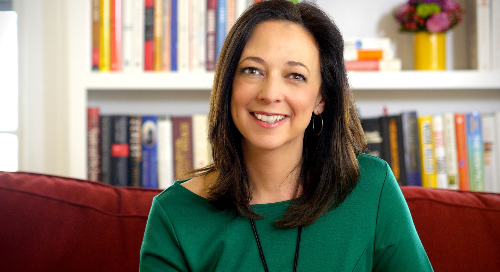 Do you ever think about the kinds of people who get promoted in your organization? Are different personality types – both extroverts and introverts – represented in that group, and made to feel like they belong? New research shows that introverted leaders, in some cases, are actually more effective in inspiring and motivating people.

To learn more about developing introverted leaders, we talked to the expert – author and Workhuman Live speaker Susan Cain. In part one of our Q&A, we talk about what it means to be an introvert, the qualities that make introverts exceptional leaders, and the best ways to recognize and reward the introverts on your team.

Read the rest below.

How do you define an introvert?

It’s also important to understand that there are neurobiological differences. The reason introverts get their energy from quieter situations is that we have nervous systems that react more to stimulation. When there’s too much going on, we feel an overreaction; whereas extroverts have nervous systems that don’t react as much. If there’s not enough going on, an extrovert will feel bored and sluggish and listless, and that’s why they’ll start looking for people to talk to and things to do.

What is the most surprising thing you’ve learned about introverts in your research?

There is an amazing correlation between introversion and excellent leadership performance. I think there is a perception that if you’re an introvert, there are some things you can do well, but leadership is probably not one of them. But the new data shows that when introverts make it to those leadership positions, they actually tend to deliver great and sometimes superior results, which is really interesting.

You can see examples of this from Gandhi through his transformational leadership, and also in business leadership. You see figures like Beth Comstock, the vice chair of GE, and Douglas Conant, the much-revered former CEO of Campbell Soup. Introverted leaders tend to solicit ideas from other people and listen to those ideas and use them, so there is not as much of a brain drain.

Also, many introverts arrive at leadership positions not because they set out to be a leader and doggedly became one, rather because they tend, by their nature, to get very passionate about one or two subjects in their lives. When they get passionate about their work, or a cause, or a mission, they end up inspiring trust, building alliances, and acquiring expertise. They ascend to leadership positions in the name of the thing that they really, deeply, care about. That is a very potent way of being a leader. People can feel that commitment.

It’s about leading by passion, right?

Yes, and it’s about how you become a leader in the first place. I think there are some people who just want to be a leader and that’s what’s motivating them. Whereas for a lot of the people we’ve studied, they weren’t motivated by being a leader, per se. They were motivated by the underlying thing they were doing.

When you work for somebody like that, you can tell the difference, too.

You can tell the difference and you end up attracting other people who are similarly motivated by the cause itself and by the project itself, as opposed to by salary or by title. Not that these things fall away – we’re humans; all these things matter. But, if you want a purpose-driven workplace, it helps to have a purpose-driven leader.

Last year Amy Cuddy told The New York Times that, “now people think it’s cool to be an introvert.” Do you agree or do you think there’s still misconceptions out there about introverts?

I think it’s both. I think that she’s right, it’s changed enormously. A year ago, I sat on a panel with Arianna Huffington, George Stephanopoulos, Candice Bergen, and a few other people. One by one they all publicly identified themselves as introverts. I really don’t think that would have happened six years ago. I do think the culture has shifted enormously that way.

At the same time, there’s still a long way to go, particularly in the business world. When you’re looking for a job or if you’re just looking to put your hat in the ring for a leadership position, I do think there’s still a stigma that is associated with the idea of being an introvert. I analogize this to the women’s movement, where we’ve come so far and there’s still so far to go.

We all crave connection and appreciation at work. Do you think introverts like to be recognized differently than extroverts and if so, how?

I think they do like to be praised publicly but not in a way that puts them on the spot in an uncomfortable way – not in a way that draws uncomfortable or unwelcome attention. You also want to pay attention to how are you rewarding them for their contributions. I remember conducting interviews in Silicon Valley and one manager told me he’d been part of a team of introverted engineers that had done exceptional work. Management rewarded them by sending them on a cruise. This is the last thing we want to do. Reward me by letting me go home to my own space, that’s what I want.

So it’s about choice?

Yes, it’s about choice and I think people do want recognition. That’s human. Everybody wants it, but they tend to want it in quieter ways.

In your book, you cite research from another WorkHuman speaker, Adam Grant. He talks about how introverts in some ways can be better leaders than extroverts. Can you talk about this and how we can get better at finding and fostering quieter people into leadership tracks?

Yes, I always challenge my audiences to think of someone they know who is very talented, but is a so-called “unnatural leader.” It might be themselves or somebody they are working with. I encourage them to sit down with that person and come up with a one- and three- and five-year plan to see where that person wants to be.

Introverts are often assumed to be less ambitious, when they are not at all, necessarily. Find out what that person’s ambitions are. Figure out how you are going to help them get there and how are you going to help them as a leader to step outside their comfort zone when they need to. You’re not asking them to turn into somebody else. You’re asking them to draw on their natural strengths.

Stay tuned for part two of our Q&A, where we discuss radical candor, building a more inclusive workplace, and giving yourself permission to be an introvert.