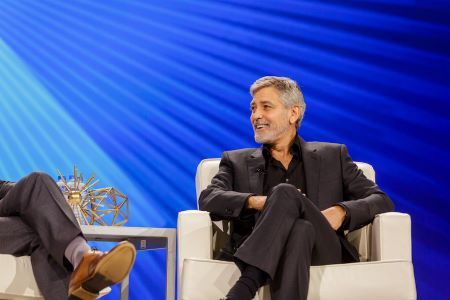 “I introduce myself as Amal Clooney’s husband,” George Clooney told the Workhuman 2019 crowd in Nashville. After Amal talked of the power of individual storytelling at Workhuman 2018 in Austin, it was George’s turn to join Workhuman CHRO Steve Pemberton on stage. The two covered everything from family life and humble beginnings to the changes we’re seeing – both positive and negative – in the world today.

George told the crowd that, growing up, his family would spend Christmas morning delivering gifts to those in need, spending time with a family they had never met to help clean and cook. “I grew up in a world where you had to be involved in one way or another,” George said. “We didn’t have any money, but we also didn’t feel poor.”

This empathy was instilled in him from the very beginning. “I carried with me my parents’ lesson of looking out for people: challenge power and protect the powerless,” George said. And he’s taken those lessons with him throughout his career.

“You can create some luck, but you need breaks,” he said. “And luck needs to be shared.”

We’ve all been given a great amount of luck, but it needs to be nurtured and grown, he said. And when it’s shared, it grows exponentially. This applies to businesses, as well – when businesses are held accountable, and when they bring values of inclusion and empathy into their operations, they profit.

One of the most important issues for businesses today is the #MeToo movement. “It’s going to stick around, it feels like it has the legs to actually get something done,” George noted. “I’m hopeful.”

But this change starts at the employment level. While attitudes will take a long time to shift, more and more companies are looking towards creating teams with 50 percent men and 50 percent women – an important step towards true equality.

Now, businesses need to make sure that the people doing the hiring are equal parts women and men, as well. George explained that he hired female executives who have held those roles since the beginning of his business, but eventually, he realized that he wasn’t paying attention to how those around him were hiring – it wasn’t quite as inclusive as he had thought. “If you’re not paying attention, you’re part of the problem.”

Work towards sharing the luck, protecting the powerless, and creating more inclusive workplaces will have a cascading effect. “How quickly things go wrong is how quickly they can go well,” George said – a mantra that he referenced a couple times in the conversation. It can be hard as an individual, but as a collective, sparking change becomes much easier.

“There are great people in life that don’t tell you what to do but lead by example,” George said. And George himself is certainly one of those people.