Recognize This! – Working more human requires we allow our humans to be fully themselves, inside and outside work. 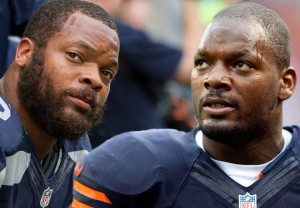 You could call me a football fan if, by “fan,” you mean I sit and a read book next to my husband while he watches the Patriots game. But I seem to have picked up more than I realized by this fan-through-proximity method. Being in Patriots country (and a communicator by nature), I’ve noticed how Patriots team members communicate with – or rather, don’t communicate with – the press. And that’s why I was intrigued by this story from ESPN on the Bennett brothers, the younger of whom (Martellus) is now a Patriots tight end.

Let’s just say the Bennetts don’t hold back on their thoughts and opinions. A couple of points in the wide-ranging article really struck home with me, especially from a context of making work more human. Reading the article, even a football neophyte like me can see that working in the NFL, especially as a player, isn’t really an experience of honoring the human at work. That’s why I particularly appreciated these two comments from elder-brother Michael Bennett (defensive end for the Seattle Seahawks).

When bosses “let you be you,” magic happens.

“The Bennetts maintain that, contrary to the beliefs of certain traditionalists, they play better when they're given the freedom to improvise, both on and off the field. Michael found that equilibrium in Seattle. ‘A lot of white coaches want to be fathers to black players,’ he says. ‘Pete Carroll's not like – “You gotta tuck in your shirt.”’ He shakes his head. ‘Do you know how much easier it is to work for somebody when you can be yourself? Why do you think Google, Apple and Facebook are so successful? When people can be who they really are, they do so much better.’ The Seahawks, he says, are the Google of the NFL. ‘They let you be you.’”

In a WorkHuman culture, it’s understood everyone can bring much more to the table when we don’t ask our people to pack up parts of themselves and leave it at the door on the way into the office. When we do, we’re often asking them to pack up exactly the parts we need most – their creativity, their passion, their desire to make a difference and an impact.

Clearly, I’m no athlete, not even on a casual level. Yet I’m sure when a pro athlete can keep a loss in perspective, rebounding to return and win is easier. Michael’s statement here is a tremendous example of achieving a good work-life balance. It’s all about perspective and remembering priorities. And having the team behind you to make it possible.

What makes work more human for you?