Recognize This! – Amazing work is being done by brilliant people around us every day, but it’s easy to miss unless we create more avenues for exceptional effort to be seen, acknowledged and appreciated. 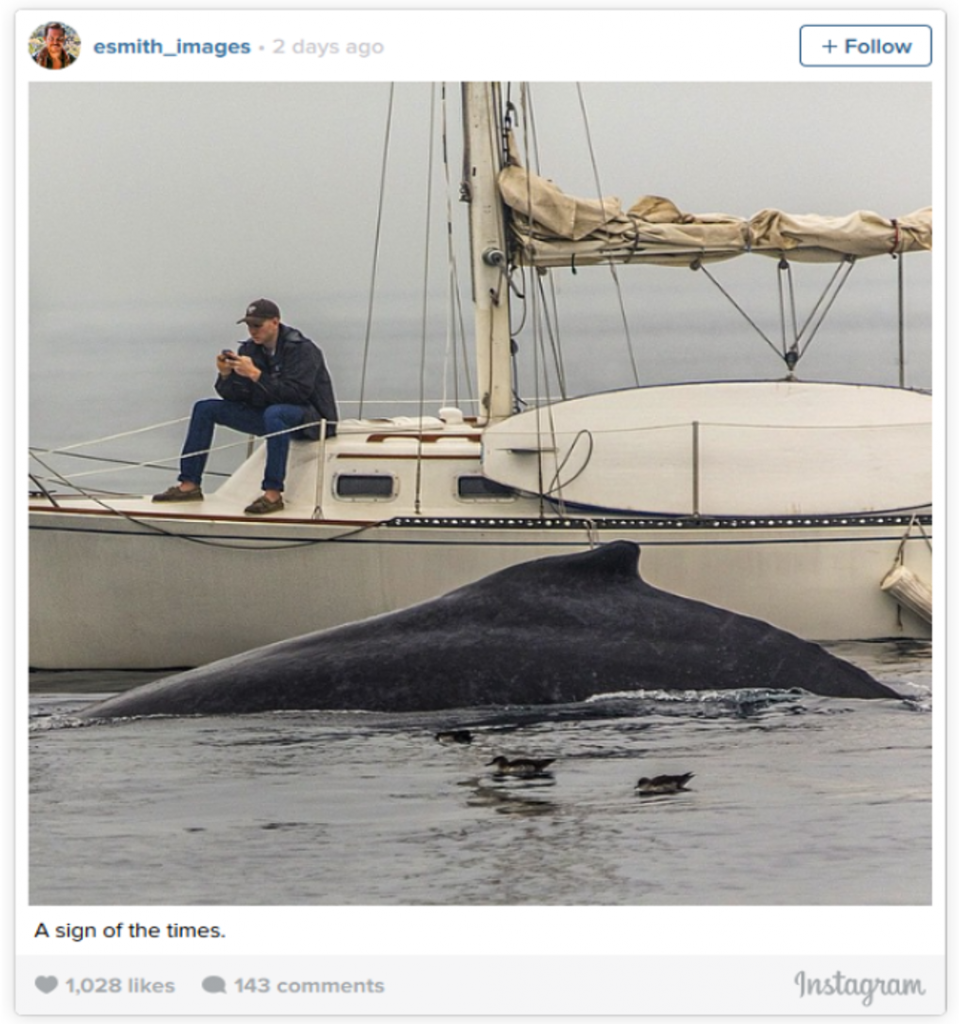 Here’s a photo that encapsulates the world we live in today. (Email subscribers, click through.)

Eric Smith, the photographer who captured this image, said about the experience:

"The whales were breaching off Redondo (Beach) and this small sailboat maneuvered into the spot where the spout occurred. I was roughly 50 feet from the whale and her calf when they surfaced next to the sailboat. The guy never looked up from his phone throughout the entire breach. Two women at the front of the boat were taking pictures but he didn't notice."

Notice how Eric captioned the picture – “A sign of the times.” Indeed it is.

How much “amazing” do we miss because we’re distracted by the mundane? I have no scientific study to point to, but I have to imagine the percentage of “Missed Amazing” is quite high. And that’s not necessarily through any fault of our own, but the nature of the busy-ness of our world and our work.

2 Reasons We Miss Seeing the “Amazing” around Us

In thinking about it more, I think we miss out on the amazing people and occurrences around us for two key reasons: we’re distracted by other inputs or we ignore potential.

The humpback whale photo is the perfect illustration of this phenomenon in the wild (pun intended), but it’s no less prevalent in the workplace. We are busy. We acknowledge the great work and contributions by others that we see, but how much do we miss? That’s why we so strongly encourage full peer recognition in true social recognition programs. As I’m known to say in strategy sessions I lead, “Even the very best manager can’t see all the good happening around them every day.”

By empowering all employees to recognize their colleagues for demonstrating your company’s core values in their work, you are adding far more “eyes” on the lookout for “amazing” every day. You are ensuring that good work is noticed, appreciated and praised, and that you are capturing the knowledge of those achievements in an actionable way.

To illustrate this point, I, as a loyal New England Patriots football fan, must use the example of Malcolm Butler, the cornerback who made the game-winning play in the Super Bowl. Butler was an undrafted rookie free agent, which means no football team selected him prior to the start of the season. He had to fight for a position on a team. As I learned in this TLNT post:

“Butler played for West Alabama after starting in junior college. He got an assist from Chan Gailey, who coached Butler in the Medal of Honor Bowl and is the current New York Jets offensive coordinator. Gailey recommended that Butler pursue the Patriots given coach Bill Belichick’s willingness to look past draft status and assess raw talent.

“This ability to see talent without the typical indicators for future high potential status likely affected not only the Super Bowl, but both Butler’s and the Patriot’s legacy.”

Sometimes, we miss “amazing” because we’re too locked into what we think “amazing” should look like. Did a member of your team complete a project with an outcome or deliverable that was different than you expected? Too often, we discredit those “different” outcomes because it’s not what we would have done ourselves, even if it was actually a better end result.

Giving people a chance to spread their wings and try new things helps overcome this tendency. In a well-structured social recognition program, peers can recognize cross functional colleagues or teams that might not be part of their own hierarchical structure. This can reveal a team member who contributed to a project and delivered an outcome outside of their “job description.” That might inform you about an avenue for career growth and development for that team member, a key need for loyalty and longevity.

What are other reasons we might miss “Amazing” around us?