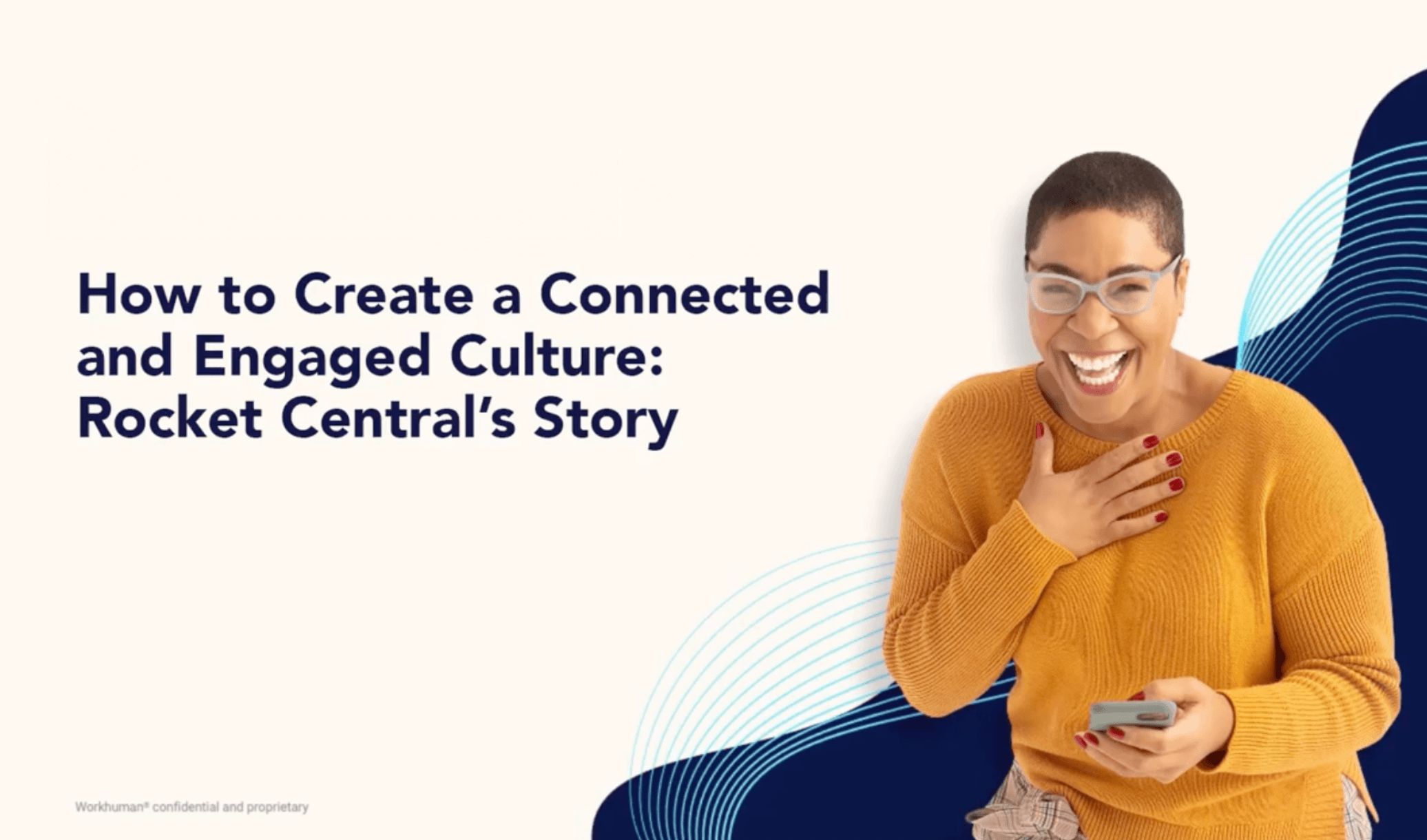 “Our ‘ISMs’ are at the core of everything we do,” observed Ashley Attaway, vice president of people experience and support at client, Rocket Central, during a recent webinar co-hosted by Niamh Graham, Workhuman’s senior vice president of global human experience.

Ashley explained that “ISMs” – a way of describing a company’s core values – drive the culture at Rocket Central. “They’re the lens for every decision we make. They are not just something that’s written on the wall. They’re evident in our actions and behaviors.” Niamh echoed that same sentiment when she observed, “ISMs are philosophies that you live by. It’s who you are.”

Rocket Central was formed in 2020 to support the Rocket family of companies, including Rocket Mortgage, Rocket Homes, Rocket Auto, and others. So it’s not surprising that there were a number of ad-hoc, legacy programs to sort through – 30 according to Ashley! – as Rocket Central began the transformation to a unified, centralized recognition program built on the Workhuman platform. “We had a lot of business areas and leaders marching to the beat of their own drum,” observed Ashley. “And there were different versions, programs, and uses through the company.”

This same disparity proved to be informative as they looked to create a consistent, company-wide recognition experience. “We really dug into our teams that had higher engagement and explored why they were having success,” noted Ashley. They found that those who were “leaning into” their recognition programs were realizing the greatest impact in terms of engagement. “Knowing that our ISMs are the key to our success and at the core of what we do, we wanted to bring all of our engagement programs together under one platform – and recognize and reward employees through the lens of our ISMs.”

A successful launch– fueled by the pandemic

Rocket Central’s AMAZE recognition program launched in January 2020, and – after the pandemic forced a shift to 100% remote two months later – it really began to take off as employees connected more frequently in the now-virtual environment. As Ashley put it: “Those [in-person] moments were really important, but we no longer had that opportunity. We solved that challenge through our AMAZE program because there was a need to still deliver that support, recognition, and reward.”

“Even though you’re not together in person, you can actually be together by learning, listening, reading, and seeing all of the wonderful things that are happening throughout the whole organization,” added Niamh. “It really does connect an organization in a very new, innovative way. And when it’s tied into your ISMs and your values, it brings them even more to life.”

“Anytime we are looking to make a change – and a change as large as this one – it comes down to communication, visibility, and accountability. Rinse and repeat,” observed Ashley in describing the launch and rollout of AMAZE. “We really leaned into virtual road shows and huddles where we got in front of our team members. We got in front of our leaders and made sure they knew they had the opportunity to recognize and reward each other, and create incentives for folks to jump on the platform.”

A portrait of recognition program success

Now two years into the program, AMAZE has an adoption rate of 95.4% among 28,000 team members – beating their 2021 EOY goal of 90%. A key factor in this success? “We send communications to new leaders to encourage them to get familiar with the solution, to use the platform, and make it part of their leadership philosophy to reward and recognize team members. Through our ISMs, of course.”

After starting 2021 at a 36% participation rate, 56% of team members have now been nominated through the program (the goal was 46.5%). And another 10 ad-hoc programs have been rolled into AMAZE. Yes, that’s correct – in all, some 30 programs have been combined onto the Workhuman platform!

As Niamh noted, the benefits of recognition go beyond its impact on those receiving rewards. “When somebody gives that moment of gratitude, it makes a difference to the sender, and the recipient, as well,” she observed. “So it’s wonderful to see such high percentages and levels of recognition and positivity throughout the organization. On both sides.”

Top ISMs reflect who they are

Ashley then shared the top four ISM’s – there are a total of 20 – for which employees are recognized. She noted that she wasn’t surprised by the four leaders because, “knowing who we are and what’s core to us, these all fit perfectly with the mindset we have at Rocket Central and the Rocket family of companies.”