Human Workplace Index: The State of the Annual Review

The end of the year is approaching, and for many employees, annual reviews are coming along with it.

This month’s Human Workplace Index looks at how employees feel about both their own performance and their employers’, as well as their concerns and desires for the workplace going forward.

Despite the seemingly never-ending flow of change employees have been dealing with, most are still happy at their current company (86.1%), with 67.7% planning to stay in their role for the next year. This is a promising sentiment for employers.

Yet at the same time, 36.4% of respondents said they are planning to leave their job in the next year. What is keeping workers where they are, and what is pushing them to leave?

Those who plan to stay put are doing so because they like the company/their co-workers (35.9%), followed by good benefits (26%). Interestingly, 13.6% of employees reported staying in their role because it would be too difficult to find a new job in the current economic climate.

As the economy continues to teeter, businesses should be cognizant of this group of workers. Why? When employees stay in a position, despite potentially being unhappy, it can lead to issues like active disengagement and “quiet quitting” – issues that can quickly spread through an organization.

Along with quiet quitting, hiring slowdowns and spending freezes have been hot-button topics in the media. Yet, this month’s survey found 69.7% of employees say their companies have not announced spending freezes in the past 3 months, despite the state of the economy.

However, if their organization does implement freezes, more than one-half of employees would look for other job opportunities (55.2%).

These insights shed light on the importance of valuing employees for their contributions. The more valued employees feel, the more secure they will be – giving them little reason to leave if/when times get tough.

Performance reviews are upon us, and most employees believe they have a good understanding of where they stand as it relates to their performance (93%). Yet at the same time, 7% of respondents say they don’t know where they stand, leading them to report feeling constantly stressed at work (60%).

When it comes to being assessed on their performance, almost one-third of the workforce reports this happening annually (30.9%), while another 18.2% report having bi-annual reviews. Workhuman® research has shown time and time again that more frequent check-ins are a good thing, so it’s promising to see that 38% of workers are meeting with their managers to discuss performance development on a quarterly or monthly basis.

In addition, almost half (46.9%) of employees said their company has updated the way it measures success in performance reviews when compared to before the pandemic. This, too, is promising: the world of work has changed, and the way we review performance should as well.

Unfortunately, nearly 40% of workers feel their company has paid less attention to their performance and growth during the pandemic. And for those workers who are only evaluated annually or bi-annually, this lack of attention is especially concerning for several reasons. Some responses include:

When it comes to self-assessing performance, however, the past few years seemed to have changed the way employees view themselves. When completing their end-of-year self-assessments, respondents said they plan to:

So, while it’s exciting to see employees valuing themselves for their contributions at work, the changes in performance evaluations and the lack of support during the pandemic are still causing workers to be concerned about their upcoming reviews. Employers should work to address these concerns as they plan their 2023 performance development strategy.

A note on “productivity paranoia”

Another trending topic, what Microsoft coined “productivity paranoia,” refers to the disconnect between managers and remote/hybrid employees when it comes to their productivity levels. In fact, Microsoft’s new report found nearly 90% of workers think they are just as productive working remotely, while 85% of managers say hybrid work is making it challenging to believe that judgement.

This disconnect doesn’t affect just productivity; it also causes employees to feel less valued and less capable of doing the job they were hired to do. When we asked about productivity paranoia in the workplace, the following statements resonated most with employees: 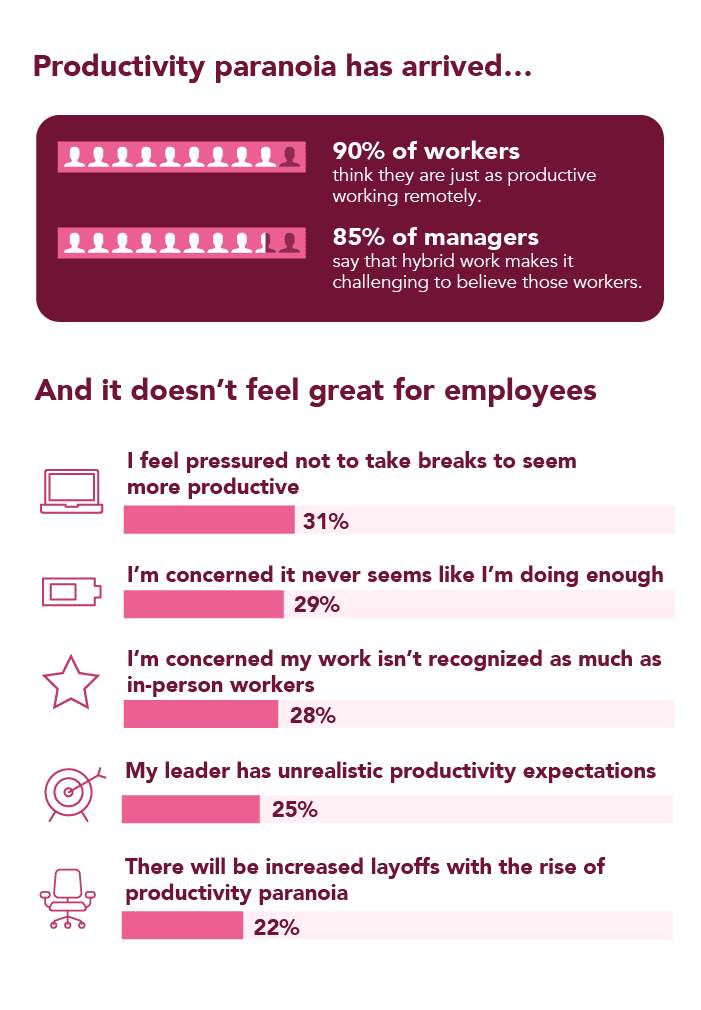 As mentioned earlier, 47% say their company has changed the way they measure success in performance reviews since the pandemic. And with 57% of those respondents saying their employers are now using productivity levels as a measure of performance, employees are feeling a little paranoid. And that certainly isn’t conducive to maintaining high levels of performance and engagement at work.

Whether performance evaluations are conducted monthly or annually, the most important step of the review happens afterwards: how well the employee implements the feedback going forward. So, how can managers support their workers, and help them reach their full potential?

When we asked respondents to rank the following factors regarding how much each motivates them to do their best work, they answered in order:

And it would seem like many employers are on the same page as their workers. When asked how employers typically thank them for their contributions, financial incentives were the most popular choice, with 60% of employees saying that is how their company recognizes them in the workplace, followed by public shoutouts/recognition (41.5%).

As it relates to professional development, however, there is more work to be done. Employees want to understand how their work is impacting the business’ goals throughout the year, and not be surprised at the feedback they receive when the annual review finally comes around. And they want their managers to clearly understand their contributions.

Employers give financial rewards to employees who produce exemplary work, but that is only possible if the manager is aware of the exemplary work being done. That’s where frequent check-ins can play a key role.

Conducting weekly/bi-weekly check-ins gives employees security because it provides them the opportunity to ask for feedback throughout the entire year. And with one-half of employees saying they will look elsewhere for a job if they don’t get a raise/bonus at the end of the year, the need for visibility and communication between manager and employee is obvious.

Following the upheaval of the past few years, workers are used to the unexpected. After a few years of practice, they aren’t shy about telling their organizations what they need to get work done. So, what do employees want in 2023? The results show the importance of financial security, with 4 out of 5 of the top responses relating to compensation. 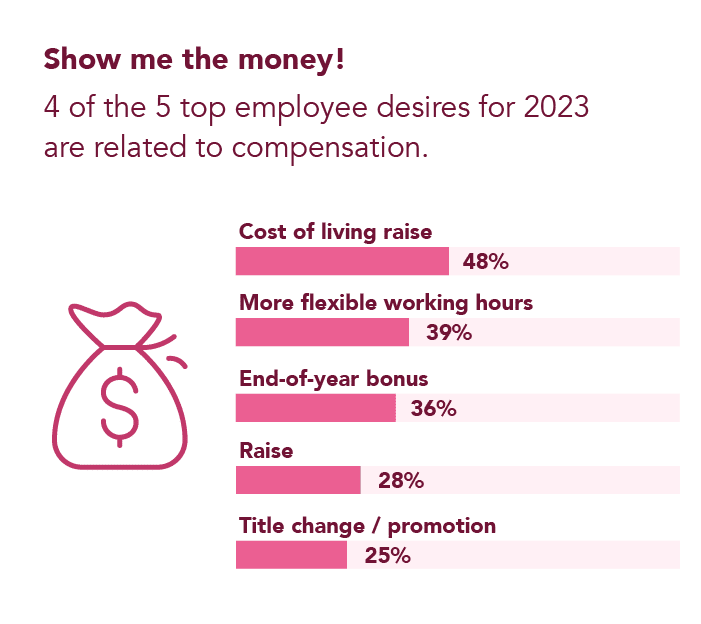 As we start to close out 2022, business leaders should be doing more than just providing frequent feedback to their people. They should also be actively asking for feedback from their people to create a better working environment for everyone. Understanding what motivates employees and how to best recognize them for a job well done, will be key to reducing the possibility of turnover in 2023.